One of the joys of parenthood is to watch our little man grow. In his knowledge, reasoning and curiosity. The realisation that while the world “appear” to revolve around him, other people have feelings, thoughts and opinions. It is one of our goals to point out different ways we can encourage empathy, sharing and building relationships.

One obvious challenge is that it is developmentally appropriate for a 2 year old to think about himself. After all it feels good- that’s all that matters to him at that age. My argument though is that what is developmental appropriate does not mean we do not expose him to what might shake his world a little. It might be a bigger shake up when he is 6 year old and continue to not show awareness of what is around him. The other thing that is frequently lurking at the back of my head are developmental disorders. Perhaps it is an occupational hazard but I do like setting little experiments to see how he responds to it- to my interest but as a little filling at the back of my head on what could be concerning or not. I think most parents do that, at least I hope that I’m not the only odd one out! 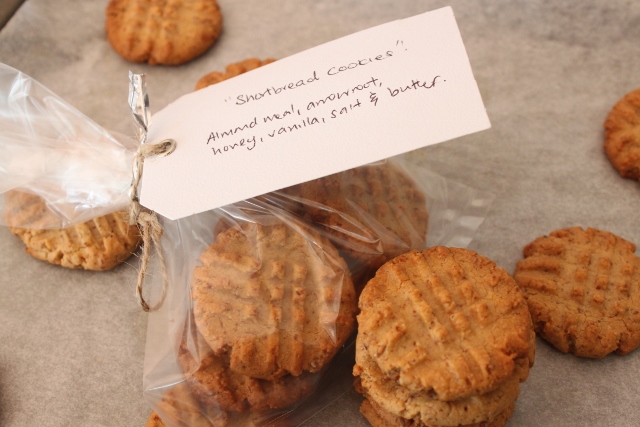 We also believe that it is our responsibility to teach him manners, thoughtfulness, being caring and kind (Asher’s future partner can thank us for that later). It does however, elicit some rather interesting responses.

So there you have it, some of our ways that we are still fumbling along. Any ideas or suggestions are welcomed.

In the kitchen, we bake together. Sometimes we talk about who we bake for and how what he enjoys others would as well. This cookie was one of my little experiments. It wasn’t as “short” as I like to be, but Asher really loves this texture. I find that arrowroot provides that starch that some cookies need but also the butter to give it a really lovely flavour and melt in your food feel. Hope you enjoy having one of these with your tea or coffee.