I wonder:  Do we start of being parents by having a “mindset” of what a parent should be like? Or “just go with a flow”? In today’s society, most parents are well read- we have “dr google” and countless pregnancy and parenting books around. None though, can replace your values and beliefs about parenting.

For the past week or so, hubby and I decided that we have to let Asher get used to sleeping in his bassinet. At night, he has no problems sleeping in there, but hates it in the day time. My dad and I have been taking turns cradling him and rocking him to sleep every morning and afternoon. Since I will not have the luxury of my family being around soon, I needed to change some things. It’s not exactly sleep training as I have no intention of leaving him in the bassinet and crying it out for 20 minutes or more or follow a strict exact time routine.

We read books such as Babywise and Save our sleep by Tizzle Hall. We also like Baby Love by Robyn Baker. While we do not think we follow a particular method exactly, we found it useful to read about settling techniques and learning how to read baby cues. What we did was a combination of methods- having a routine after tracking what Asher does, reading his cues, being persistent and being consistent with our approach.

I will admit that we tried letting Asher cry out in his bassinet for 5-10 minutes at the start, testing out if he would self settle when we put him in the bassinet. This is especially so when we know he does self settle at night. It didn’t work as he would cry himself to a frenzy and we concluded that he is still young (7 weeks when we tried) need us to help him soothe himself before he could sleep. In the end, we did a feed, play and sleep routine. We found out from feed to play, Asher would take approximately 1+ hour before he shows signs of dis-engagement and yawns. Once these signs appear, I would wrap him up in a swaddle and rock him gently. Once he is drowsy or close to asleep, I will place him in his bassinet. Sometimes he would require us to rock him or pat him a little more, but after a few days of doing this, he seem to understand this routine.

My only issue though, is that he wakes after approximately one sleep cycle and would require us to soothe him to sleep again. This would happen more often in the afternoon, where he finds it even harder to self soothe- and once his bottom touches the bassinet he would wake. In fact, he would protest if we leave him in the bassinet. I’m not sure why as at night, he is able to sleep for quite a few hours. At the moment, I would try to rock him to sleep after his first sleep cycle for approximately 20 minutes. If that does not work, I would assume it is sufficient for the time being and proceed to feed or a diaper change. I’m hoping it is an age related thing and as he becomes older, he would be able to soothe himself more in between sleep cycles.

Asher does not like the pacifier or using the traditional method of sarong to rock him to sleep.

The advantage is, in the evening, we started to wind him down at 6pm. We would give him a bath, a massage, say a prayer for him and proceed to swaddle and rock him to drowsiness. He would sleep in his bassinet from 7+ to usually 11ish or even 12:30. Then, his cycle will repeat itself every 3 hours following the long sleep.

My conclusion so far? When it comes to sleep, read as many articles and research as you can but adopt the method best for your child. I am sure my journey has just started but I feel strongly about not forcing any particular method. It is just as important to read the child. 😉 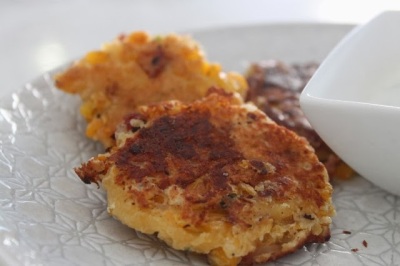 All this talk about parenting and sleep makes me feel like… breakfast!! I made corn fritters when a friend came by for breakfast one morning. I really love a good corn fritter or any fritters for that matter. I used cream corn for this instead of egg to bind it. It really seems to make it more crispy on the outside. I also made a simple dip with chives, yogurt and lemon juice which worked really well with the hot crispy fritter. 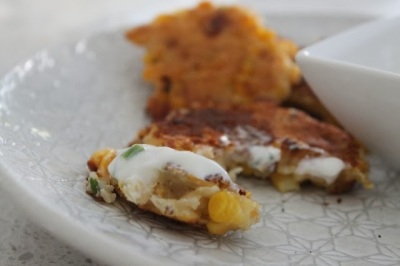 Mix everything together. Heat a pan with oil. Drop tablespoons of mixture to the pan. Serve hot with a dip.