I have been thinking of writing more thoughts about marriage- simply because I think that we experience and learn so much from it on a very day basis, and it will be a waste not to pen it down. Abit of it is humour, and abit of is just pure fun and frustration. Just to add a dash of sweetness and kindness to the mix as well.

Marriage is like a book of good recipes. You want to keep the good ones and learn from the mistakes/challenges. There is no such thing as a bad recipe isn’t? There is always something to learn from.

It’s funny. This blog has followed through on my journey in my studies all the way to us getting married. It has also followed through quite a few of my birthdays too. Since I was 21 actually. Which make it…. a decent amount of time!

Which brings me to my birthday that happened about a month ago. The day went really sweet. Hubby made me breakfast in bed, brought me a bunch of flowers and we had the most awesome Jap buffet dinner ever.

But he didn’t get me a birthday present.

He tried. He really tried very hard.He wanted to get me a car charger massager thing to help with my bad back while driving. Apparently it doesn’t deliver to Australia. And while that thought was sweet AND practical, I was actually thankful that he didn’t get me a gadget that may not work……

Then he tried looking for a bag, nothing that caught his fancy.(he bought me a beautiful Oroton bag last birthday! and a little clutch a few years back and it was the most successful gifts ever!)

He tried thinking outside of the box, he tried to ask me. But I joked around and said “Tiffany, or anything belonging to the apple range of products” (which I know it is out of our household budget at the moment. given that we are building and wanting to save those shiny new products for our new home). So that was out as well.

He tried to hint at getting a ice cream maker or hair straighter or something to that effect. I said we are only married for 17 months hon, not 17 years! Couldn’t you leave appliances out? So that was out of his list too.

So I became the not so grateful wife who said no to any suggestion.. and ended up with..

Which surprisingly, I was quite ok about. In fact, I think he was more upset that he didn’t get me anything. I, on the other hand, didn’t put too much emphasis on it because he chose to spend the day with me and he respected me enough to give me what i want..which was…rest.

But I got really nucky when he suggested using funds from my birthday gift to buy a coffee machine for the household… I was really really angry!

Which means I was fine with no gift, but not ok if the same funds are directed to elsewhere-no matter how practical it is.

And I admit that even I think it looks confusing after re reading this post. But it is the principle isn’t it? He did get it in the end and I explained to him by saying…

“How would you feel if I saved up the money to buy you a brand new computer, but you didn’t want it so asked me to wait for a while until something interesting/new came up. So instead, I suggested taking the money and using it for a spa retreat. For myself. I will bring home a small bottle of vanilla massage oil for you”

No gifts aside. He got me this awesome durian cake. It’s not quite the same as the one my parents used to bring back for my grandmother’s birthday. But it will do..because it is in PERTH and beggars should not be fussy. 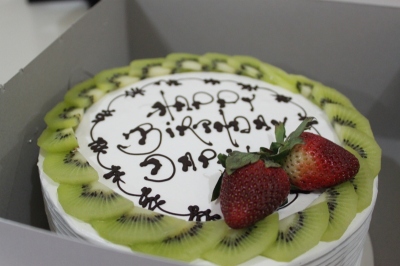 3 thoughts on “Marriage and Gifts”