I blogged about this before. Making pizzas at home and/with guests is easy. Best of all, your guests can be involved in the process of it. In fact, we are going on a road trip on Friday! and this pizza is on our menu for one of the dinners as we travel from Adel to Mel.

Bakers Delight came out with a fairly new range of their pizza bread base a few months ago. For around $4ish, we get 2 pre baked bread base. Just for fun, and because I thought it would be a simple dish for our vegetarian guest to join us in AND also that my meat lover husband get to have his meat base pizza.

I rolled the base as thinly as I can. I like my crust crisp. Good thing is that this base has plenty of dried oregano sprinkled on it plus some cheese. A tasty crust for sure. 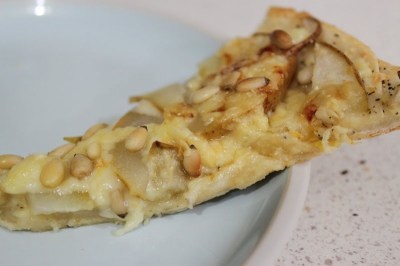 With generous slices of pear, handful after handful of morezella and cheddar cheese.. not forgetting pinenuts, this is a winner combination. One that I would have NEVER thought of before trying it at Little Creatures Brewery.

Pear and Pinenuts Pizza
1 Pizza Base (you can also see how I did mine previously here)
1 pear sliced thinly
around 1 cup of pizza cheeses such as mozzarella and cheddar.
around 1 handful of pinenuts.

Roll pizza base as thin as possible. Sprinkle some cheese on it. Place slices of pear on it, top with cheese and then with pine nuts. Bake for around 15-20 mins in a pre heated 200C oven.

3 thoughts on “Pizzas- Pear and Pinenuts”