Following Kenny from Life is for beginners’ suggestion, I think it’s an awesome idea to have a countdown to Christmas. Nearly like an advent calender -except that I will have difficulty posting everyday! I will however endeavor to post as often as every other day. =)

My other idea for Christmas is to do a meatloaf. Does apple plum sounds festive? Funny enough, I was never game enough to mix sweet and savory together but this odd phrase of experimentation in food is now unleash in me and I’m now game to do so! It’s tangy which makes the meatloaf more interesting.

Now, I just need to convince my grandmother and AR”s brother (who are visiting this Christmas) to be happy with this meal idea… 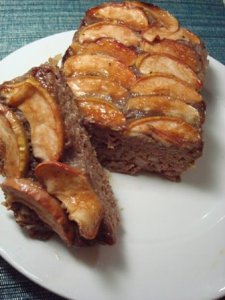 1) Marinate beef mince with all the ingredients listed (except apple and glaze) for 30 mins or so.